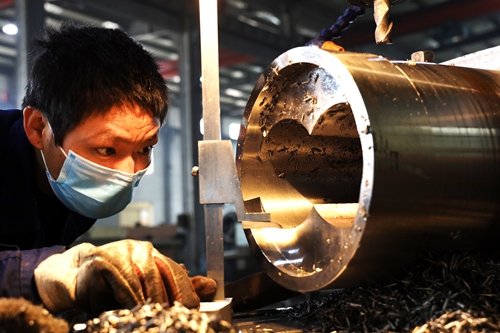 A worker at a factory in Zhoushan, East China’s Zhejiang Province, produces a molding machine screw on Thursday. Currently, many enterprises and factories nationwide have resumed production, while carefully ensuring containment of the CODIV-19 spreading. Photo: cnsphoto

After factories in China shut down due to the ongoing coronavirus epidemic, the world's supply chain for almost everything from cars to electronics to designer fashion goods has been crippled, and in one way or another, consumers and companies in almost every corner of the globe from Southeast Asia to North America to Europe felt the brunt of the deadly virus. The world came to a realization, one that might not have been as real and tangible as it is in ordinary times: How critical China is in the everyday life around this highly globalized world.

Inevitably, such a realization has also played right into the hands of some foreign officials and pundits, most notably in the US, who have been relentlessly pushing to isolate China from the rest of the world and to reverse a globalization process that, despite all of its flaws and unpleasant consequences, have benefited not just China but countries and regions around the world, Chinese analysts said on Wednesday.

However, these anti-China and anti-globalization forces will also be faced with the reality that China is simply irreplaceable in the global value chain, at least in the foreseeable future, and an epidemic of such wide and deep implications only accentuates the need for closer global cooperation rather than isolation, according to Chinese and foreign business analysts.

Illustrating the global supply chain's heavy reliance on China, several global giants from carmakers to smartphone manufacturers have cut down on production or adjusted output projections. Apple on Monday cut its sales expectations for the first quarter, citing "constrained" supply worldwide and declining demand in China due to the outbreak. Most of Apple's popular iPhones and other gadgets are assembled in China.

In the UK, carmaker Jaguar Land Rover reportedly had to use carry-on luggage to ship parts made in China to avoid closures of its factories back home. In Vietnam, small factories have also been shut down due to shortage of Chinese materials, equipment and workers, several Chinese-funded companies have told the Global Times.

"It is impossible to isolate China from the global value chain, because there is no other alternative at least in the near future. To put it simply, China is irreplaceable," Chen Fengying, a research fellow at the China Institute of Contemporary International Relations in Beijing, told the Global Times on Wednesday, noting that some firms have already tried that but to no avail.

Since the US launched a trade war with China nearly two years ago and actively pursued China-US decoupling, and as wages in China have risen, some businesses, including Chinese firms, have been trying to shift certain production activities to Southeast Asia, but that has gone nowhere because the firms still depend on materials, equipment and even skilled workers from China.

"Many textile factories have moved to Vietnam and Indonesia to open production lines, but half of them have already returned because it is simply impossible to make high-quality, profitable products there due to a lack of resources," said an official on condition of anonymity in Shaoxing, East China's Zhejiang Province, a major textile production base, which supplies fashion brands in Europe and elsewhere. "Our customers come to us because no one else can make such high-quality, affordable products like ours."

Even for companies that already have production lines in Southeast Asia, they would still have to come back to China for at least some stages of production. For example, Japanese carmaker Toyota can make certain parts back in Japan or Thailand, but the parts would have to be shipped to the main production base in South China's Guangdong Province for use, a source close to the company told the Global Times on Wednesday. 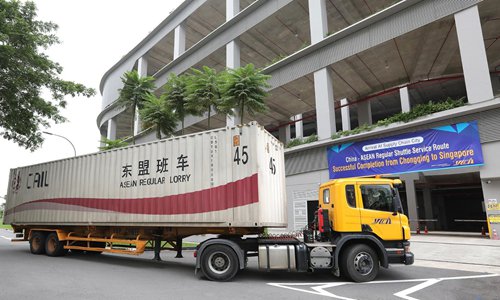 A truck arrives at a supply chain hub in Singapore on Friday after a seven-day journey covering over 3,000 kilometers as Southwest China's Chongqing Municipality explores land logistics with member countries of the Association of Southeast Asian Nations (ASEAN). Five other routes were established previously. The municipality debuted freight train services between China and Europe in 2013. Photo: VCG

What this epidemic shows is just how much the world depends on China and how China is also so reliant on the global economy, said Wang Jun, an expert at the China Center for International Economic Exchanges in Beijing.

"Some would paint that as a negative thing for the world regarding certain political arguments and agendas, but the reality is that it is a mutually beneficial relationship," Wang told the Global Times on Wednesday, "if anything, this epidemic showed that the world should work together to contain the epidemic and make globalization more beneficial to all. Decoupling is simply impossible and does not benefit anyone."

More importantly, while the impact of the epidemic on the Chinese economy and on the global supply chain remains severe, it will be short-lived, and once the outbreak is reined in and factories reopen, the global supply will recovery instantly, Chinese officials, businesses and analysts said.

As the numbers of newly confirmed infections in places outside of Hubei are falling, Chinese officials have mounted unprecedented efforts to revive economic activities. While some factories and businesses still face daunting challenges, many large industrial companies and foreign enterprises have already resumed production in recent days. Some export hubs in eastern coastal China are even offering cash incentives to help companies to complete foreign orders.

"I think most analysts would agree that if the epidemic is put under control soon, its impact on the Chinese economy will be short-term and can be offset by gains later in the year," said Chen, adding that the key is to control the outbreak first. "There will always be people badmouthing the Chinese economy. There will always be calls for deglobalization. But the most important thing is we have to focus on our own task to fight the virus and restart the economy, the rest is just empty talk."